Last month, I spent two immersive days in Iceland on a study trip with the All-Party Group on workplace equality, supported by WorkEqual and Alice PR 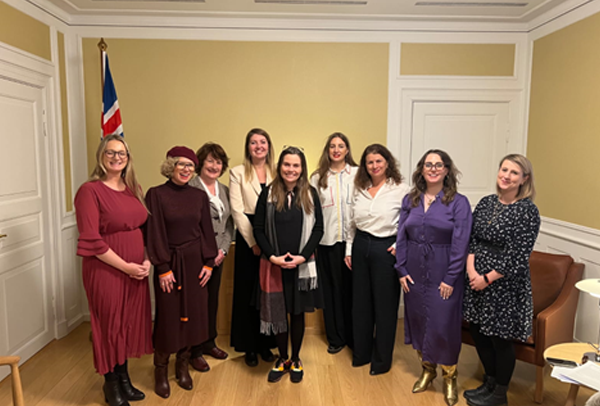 Last month, I spent two immersive days in Iceland on a study trip with the All-Party Group on workplace equality, supported by WorkEqual and Alice PR. I was joined on the study tour delegation by WorkEqual founder Sonya Lennon, and CEO Angela Smith, along with members of the All-Party Oireachtas Group on Workplace Equality: Co-Chairs Senator Lorraine Clifford Lee and Senator Emer Currie.

The purpose of the study tour was to explore how Iceland has become a world-leader in gender equality, and what Ireland can learn from them at both a Parliamentary and Municipal level. We met with trade unions, advocacy groups, MPs, and councillors. Even the Prime Minister managed to find time to meet with us!

Some of the many interesting people the delegation met while in Iceland, included:

From the research on our trip, we noted that there are two big levers as to how Iceland has achieved gender equality. One is sustainable, affordable childcare, where parents pay approximately 10% of the total cost. Childcare in Iceland is part of the country’s education system. It is not seen as a separate, stand-alone system. The second lever is mandatory shared parental leave of six months for each parent and six weeks of which is transferable between parents. We thought, ‘Wow, that is pretty bold and pretty brave.’ It was emphasised to us that only when the leave was made mandatory did both parents start taking it. Then a shift was seen in how gender equality was playing out in the workplace.

Obviously, all is not yet perfect in Iceland. There are challenges along the way around public

discourse, there are gender-segregated workforces, and there is still an issue with the

bridging of the gap between the end of parental leave and the start of day care. However,

Iceland is far ahead of where we are going in respect of ending the gender pay gap, achieving gender equality in the workplace and in the home, and work-life balance.

Local government in Iceland oversees the provision of school classes, day care, childcare, and road planning. We could learn a lot from Iceland, not only in respect of gender equality but also in how we deal with, fund, and empower local government, leaving national government to deal with the bigger, broader picture stuff.

A key learning I took away from the study trip was that in Iceland that childcare, day care and parental leave are considered through the lens of the rights of the child. The focus is on the right of the child to be cared for by both parents, socialised, and educated within the education system rather than a solution to allow parents to work. In Ireland, when we talk about childcare and parental leave, I am not sure that we look at it through the same lens. Instead, I have found the narrative to be very much focused how we can get parents into the workforce instead of the right of the child to be cared for and to spend time with both parents.

When we were talking to activists and campaigners in this area it was highlighted to us that there are very low levels of lone parenting in Iceland. Even if a partnership dissolves, or if it perhaps never even developed in the first place, there is a broad societal acceptance, and indeed intense pressure, for parents to co-parent a child, regardless of their own relationship status. We need only look at the difficulty many lone parents have in Ireland with even getting basic maintence support from the other parent to know that we have a slightly different cultural context. When we mentioned this to the Icelanders that we met there was lots of Icelandic muttering and bewilderment, wondering how on earth we have so many situations where one parent can simply negate their parenting responsibilities. This will be an additional challenge that we will have to consider as part of our campaign for gender equality.

Alas these two big levers of change in Iceland did not come about organically; they were driven by legislation. Parental leave was not being equally shared, nor taken, until the system of mandatory sharing and use-it-or-lose-it was introduced. To some of the people (and politicians!) that I spoke to in Ireland about this balked at the idea and said that it would never work for us in Ireland. To them I say: we need to be open to considering what has worked in other countries in order to tackle gender inequality, and find what will then work for us here. If we are saying “no way” form the get-go we are never going to get anywhere.

In Iceland the system of state-funded and managed childcare began over 20 years ago. It has taken time to grow, build, evolve and gain political support and will. But they got there. Right now, in Ireland I fear that the challenge of tackling the ever-growing costs of childcare and the needs of the sector is proving simply too much for government to contemplate, never mind handle. But we need a big vision and big bravery from government for the childcare sector. If we cannot be politically brave for our children, who can we be brave for?

The tour provided much food for thought for the group, and since arriving back on Irish soil, I have been busy digesting the learnings and working on plans with others to continue to make Ireland a more equal country. The Labour Party has bold, radical proposals for childcare here in Ireland, and these have been excellently articulated by our Party Leader, and Chair of the Oireachtas Gender Equality Committee, Ivana Bacik. Perhaps it is time to merge our Party’s call for a Donogh O’Malley moment for childcare with the Icelandic model drive to end gender equality. What a revolutionary moment that could be!