Campaigning down under for Labor

Dublin Bay South member Hugh Murphy has just returned from Melbourne, where he played a key role in the election of an Australian Labor MP in the recent federal election. He recounts his experience in an article for Left Field. 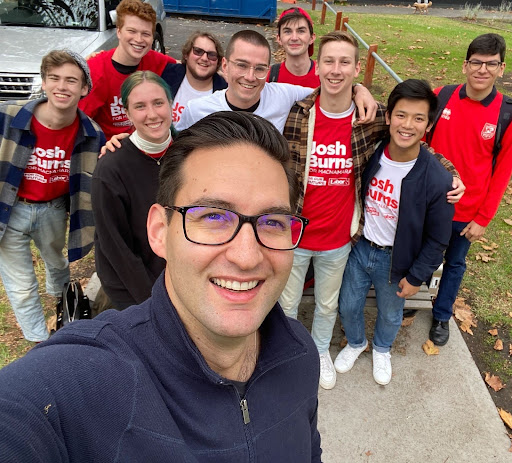 Earlier this year I was studying in Hong Kong on an exchange as part of my studies in Trinity College Dublin. Suddenly in April, my classes moved online, so I decided to take the opportunity to spend a number of months in Melbourne Australia. To be honest, my main aim was to experience Melbourne’s almost London/European like culture (its more fancy bars and galleries than beaches!), but I was delighted to get an opportunity to join the campaign to help Josh Burns MP retain the seat of MacNamara for the Australian Labor Party in the recent election.

The opportunity arose thanks to Dermot Ryan, who many of you will know from when he managed Ivana Bacik’s bye election campaign. Dermot spent 7 years down under working with the Australian Trade Union movement and has a history and deep connections with the Party down under. Among those who took me under his wing was Dermot’s former boss and now Labor Senator Tony Sheldon. I was thrilled at the opportunity to play a part, and what an opportunity it turned out to be!

I was assigned to the MacNamara constituency (or electorate as they call it), due to the fact that it is very much a marginal seat for Labor. The constituency is very diverse, and includes a significant Irish Australian community, a strong Jewish community and many inner(ish) suburbs many along the Melbourne coast. The similarities with Dublin Bay South are striking. MacNamara is what is known as a three way marginal, meaning that there was every chance the seat could be lost to the Liberal Party (which in Australia is anything but liberal) to its right, and the Green Party. The Green Party have made many inroads to Labor’s inner city vote in Melbourne in recent elections, so the rivalry is intense.

As a key marginal, the electorate and Josh’s campaign were prioritised for support from Labor’s Community Action Network or ‘CAN’, which is the grassroots mobilisation campaign built by the party since 2010, primarily led by then Party official Stephen Donnelly, who is a comrade and friend of Dermot having both worked at the Australian Transport Workers’ Union. Stephen is a fascinating character. He based CAN on Obama’s Organising for America network and is a ‘true believer’ in grassroots organising.

At its most basic the CAN approach is an extension of how we campaign in Ireland. Until recent years, knocking on doors and speaking directly with voters was a rarity down under, whereas as we all know, it is the bread and butter of building a seat in the Irish system. But it goes further. Based on the theory of grassroots organising devised by Marshall Ganz, an academic at Harvard.

The approach is highly targeted, and as I approached every voter, I was highly informed as to their likely voting intention; if undecided I was armed with targeted information as to what might sway their vote. For instance, our candidate Josh Burns has a proud record on climate action, so key messages and evidence of his record were given to voters swaying towards the Green Party.

And I know that my hours of campaigning made a difference! In the end, Josh won just 2,000 primary votes (1st preferences) more than the Green Party. Once he saw off their candidate, he went on to comfortably beat the Liberal candidate to be returned as the member for MacNamara.

And of course, it wasn’t just a victory for Josh and our MacNamara team. Josh was just one of 77 Labor MPs returned in the election of a new Labor government. Among my best memories is watching the results trickle in on election night as it became clear Labor had won a majority and Anthony Albanese would become the next Prime Minister of Australia. It is hard to describe the ecstatic mood and atmosphere at the Bowles Club in Middle Park where a joint election party for three neighbouring constituencies had been organised. I was surrounded by ‘true believers’, who reminded me of the many longstanding Labour Party activists who went out day and night in July 2021 to elect Ivana.

But apart from campaigning, I learned about Australian Labor values. Values of fairness and equality, so similar to our own. Labor’s win is not for power for power’s sake, but so that they can now begin to deliver on climate action, improve aged care and childcare. A Labor government which will invest in Australian jobs and manufacturing, make third level education more affordable and stand up for and with Indigenous First Australians.

I have become a convert to the ‘organising model’ and will be speaking loudly about the need for Irish Labour to build on our proud history as a campaigning party and develop our organising and mobilisation of members more. We have an inspiring leader with Ivana at the helm, and I have no doubt that she can help to inspire people to go out and campaign in their communities for a fairer and more equal Ireland.

Finally, some thank yous. To Josh Burns MP, an inspiring candidate who I will be keeping a close eye on as he no doubt rises through the ranks of Labor. Anthony Naus, the Field Director for Victorian Labor and Roman Ciofuli, the field organiser for Macnamara, who guided and mentored me as I learnt the ways of the CAN approach. And of course, Dermot Ryan and Stephen Donnelly for helping to make it happen in the first place. I am proud to call them all not just comrades but friends.