The past two weeks have been an extremely exciting period for Labour Youth. After a long gap caused by Covid, we have finally been able to organise our first proper college recruitment season after two years. 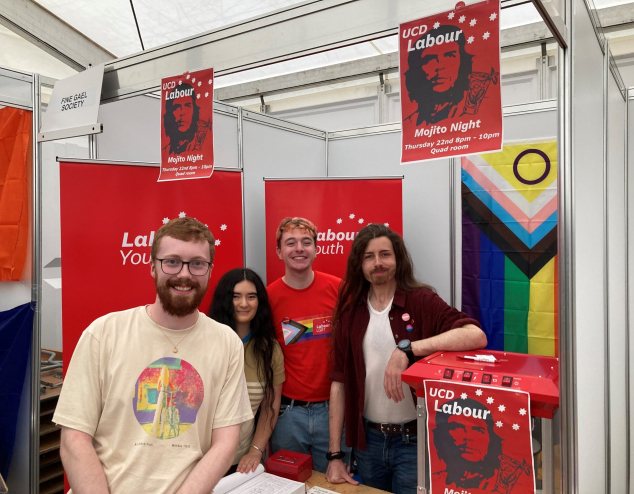 The past two weeks have been an extremely exciting period for Labour Youth. After a long gap caused by Covid, we have finally been able to organise our first proper college recruitment season after two years. While the threat of Covid-19 is still present, the lifting of restrictions on college society fairs have meant that it is again possible for Labour Youth members across the country to get out there and explain what our movement is all about. Even better that this recruitment season has been tremendously successful, and hopefully one which will see a renewed sense of activism and campaigning among Labour Youth.

The first week of college recruitment began (as it usually does) with both UCD and Trinity College having their Freshers’ Fairs in their usual eclectic fashion. As the two colleges with the traditionally most active Labour presence it is no surprise that saw the largest number of sign-ups here. However, the second week was indeed much more diverse with practically every campus around the country (from Maynooth to Galway!) having their events spread out over the Wednesday and Thursday. Thankfully, due to our active membership across the country we have been able to attend most of these events.

However, most does not mean all. One of the unfortunate aspects of organising on college campuses is that in most cases, we need active members already on campus in order to establish or maintain branches. This has been especially apparent with our lack of branches in the number of Institutes of Technology and Technological Universities around the country. As the party of the trade union movement and a party founded by industrial workers, we should have very active branches in institutions. At the moment, this is not the case. However, with the help of our Labour Youth members in Louth (and our Louth TD, Ged Nash!) we have successfully recruited for and started a Labour Youth branch in Dundalk IT. This is a massive step in the right direction and hopefully this experience of recruiting and organising within an IT structure will help us to expand into other similar institutions.

As is always the case with Labour Youth, we are a section which actively campaigns on the issues which concern the youth of Ireland. This year is no different and our #Decrim campaign easily proved to be the most popular thing at our stalls. In particular, the Decrim badges were tremendously successful, even with those from other political parties! This was Labour Youth at its best and our active campaigning has traditionally set us apart from other political societies. Even if people didn’t sign up to Labour Youth, they left with some Labour Youth material! Also popular were our Labour Youth condoms containing the slogan “Made legal by Labour”. Simultaneously acknowledging the work of Barry Desmond and showcasing the party being at the vanguard of social change, Labour’s proud history was a great recruitment tool for those looking to be part of the party of change.

Overall, this year’s recruitment campaign has been a great success. We have had fantastic interest off the back of our #Decrim campaign, we have finally been able to have social events allowing members to properly socialise and build long-lasting friendships and connections, and off the back of this we are looking to revive branches across the country, as well as the new branch in the aforementioned Dundalk IT. Building on this level of recruitment, we are very much looking forward to our National Youth Conference in Ennis in November and expect to see more diverse, creative, and active Labour Youth going into the future.