On November 7th Labour Women hosted our first in-person conference and AGM since 2018. 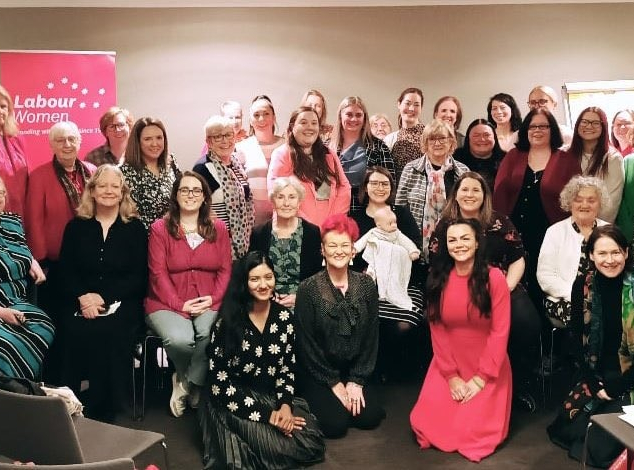 It was such a pleasure to get together again to catch up and plan for the term ahead. While there was serious business on the agenda, including the election of a new Executive and numerous topical motions, the value of bringing our members together after such a long period cannot be understated. Kicking off the day Linda Kelly led an insightful and inspiring session on ‘Power and Perseverance’, which left all those in the room roused and ready to run, or support those who wish to run. After lunch, Party Leader Ivana Bacik T.D. addressed the Conference, considering the role Labour Women has played over the years. Outgoing Chair Ellen O’Sullivan presented the Rosie Hackett award to the Big Start campaign, represented by Eilish Balfe, Amy Dowd and Deborah Reynolds, in recognition of their achievement organising the early years education and care sector, and achieving better pay and conditions for their members.

Looking ahead, the Executive’s work over the next two years will focus on election preparedness for our members and our candidates. Labour Women want to support women at all stages of their political involvement, from new members, to seasoned campaigners. To that end we hope to organise training sessions throughout 2023, while continuing our campaigning work on issues including early education and care, women’s health, gender equality in politics and more. A number of motions were passed at Conference mandating the Executive to focus specifically on increasing fundraising efforts for women candidates and to make training a priority. Conference also adopted a new Labour Women policy response to Domestic, Sexual, and Gender-Based Violence.

It was bittersweet to bid goodbye to outgoing Executive members, in particular outgoing Chair Ellen O’Sullivan and LW stalwart Evanna Craig who stepped down after 8 years on the LW Executive. Ellen and Evanna have worked tirelessly to support women in our party. It was also an opportunity to pay tribute to the enormous contribution Aideen Blackwood has made to Labour Women’s work over the past number of years, and wish her well in her new role as National Organiser. We were delighted to meet and welcome Sumyrah Kahn, the new Youth and Equality Officer, who gave great support organising the event.

I was honoured to be elected Labour Women Chair and look forward to working with the LW Executive, our members, Constituency Women’s Officers, and the Party leadership to ensure that in 2024 we have as many talented candidates on the ticket as possible. Our members are our greatest strength, and the spirit of intergenerational solidarity, sisterhood and support that characterises Labour Women, is what I want to take forward as the hallmark of our campaigning work over the next two years. There are three remaining positions on the LW Executive: Outreach Officer and two ordinary members, these will be filled by co-option. An email containing further details on this process will be circulated shortly. If you feel you have a contribution to make to our work please do consider it!

In the meantime, if you have any ideas or suggestions you would like to suggest to Labour Women, please don’t hesitate to get in touch by emailing [email protected]