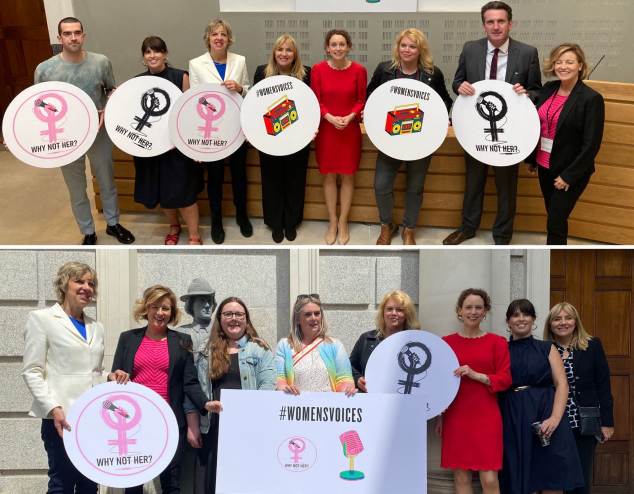 As Arts and Media spokesperson, I was delighted to launch Labour’s Diversity in Broadcasting Bill this summer. I believe the time has come to amplify women’s voices on our radio stations by setting a clear, fair and attainable quota of 50% female representation on our airwaves.

This Bill is about representation, but it is also about the material wellbeing of our artistic community. Making it onto a radio playlist can be a life changing experience, but right now, far too many are simply not getting a platform to perform their work.

In putting together this piece of legislation, we have worked closely with the Why Not Her? collective, a group of artists and musicians who are working to make an active and lasting difference in the landscape of music broadcasting. Founded by Linda Coogan Byrne, Why Not Her? has highlighted the woeful under-representation of women in both music and talk radio.

Over 3.2 million people tune into the airwaves each day in this country. Reaching this audience can mean the difference between a young musician getting their big break or leaving the industry forever due to lack of financial security.

The evidence clearly shows that many radio stations simply do not give female and diverse voices a chance. In the last year alone, just three songs by women based in Ireland were featured in the top 100 most-played artists. Not one artist of colour, male or female, appears on this list – and at least one major radio station played only white male artists in their Top 20 playlists for five whole years in a row, from 2017 to 2021.

These figures are simply absurd in a country with an enormous wealth of fresh, diverse musical talent. We cannot allow our airwaves to remain so out of step with the country of Soulé, Tolü Makay, Cherry Dragon, Gemma Bradley, Denise Chaila and so many others.

This is why our bill is needed. By setting a quota of 50% of airtime for female voices, we would be following the lead of at least five Irish radio stations who have already reached this target voluntarily. Rather than reaching for the impossible, this bill looks to accelerate the pace of change that is already happening on our airwaves.