Care and community sector workers are on our knees. We haven't had a pay increase in 14 years. We've had our marches, we took strike action and we still were shown no respect from this government but that is changing. 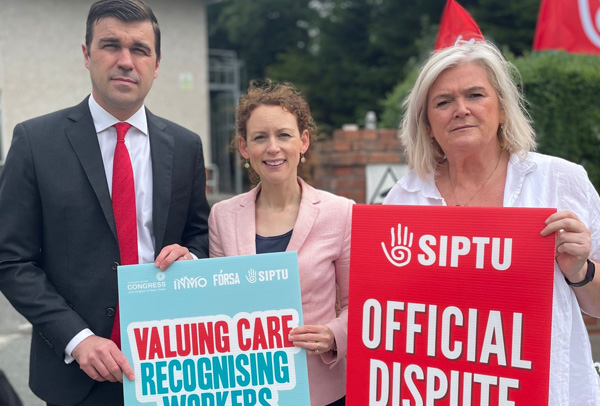 The reality is my colleagues provide a wide variety of services including personal care, crisis intervention, meals on wheels, youth clubs and many other essential schemes.

What unites us is that we fill the gaps left by the State and are the lifeline for the most marginalised people in our society.

The wheels of care in this State could not turn without us. It’s time we were treated fairly by this government.

The increasing cost of living makes the situation now impossible. It is not possible to pay bills, provide for children, pay mortgages or rent a home on wages that are the same as they were in 2008. Many of my colleagues are facing into a very difficult winter as the cost of living continues to increase.

Earlier this month the Dáil voted in favour of a motion supporting the demands of the Valuing Care, Valuing Community campaign. During the debate on the private members motion sponsored by Labour Party Health spokesman, Duncan Smith, the Minister for Health, Stephen Donnelly, and Minister of State at the Department of Children, Equality, Disability, Integration and Youth, Anne Rabbitte both spoke in support of addressing the issue of pay for care and community sector workers.

Like all workers we are being squeezed by the runaway cost of living crisis and have been stuck on the same rate of pay since 2008, with no way of securing a pay rise – apart from taking strike action, is not acceptable.

We need to keep up the pressure and make this happen once and for all.

Community and care workers need a pay rise and we need your support.

The pass the parcel approach by the Government must end. Workers in community and care organisations are saying enough is enough. We will take to the picket lines again if the Government does not meet its responsibility to ensure we get pay rises we need to cope with the worst cost-of-living crisis in a generation. Nothing less will do.