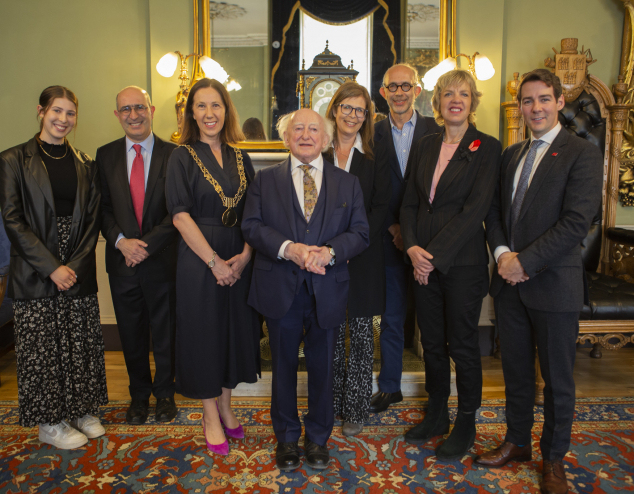 The event was kindly hosted by the Lord Mayor, Alison Gilliland, in the Oak Room of the Mansion House. Uachtarán na hÉireann Michael D Higgins (a former cabinet colleague of Mervyn’s) was in attendance and the event was addressed by DSW Constituency Chair, Ciarán Ahern, Party Leader, Ivana Bacik, and Mervyn’s son Gideon Taylor. A number of Mervyn’s family and many former comrades and friends attended.

Mervyn practised as a solicitor and then became a phenomenally popular elected representative for the Labour Party in Dublin South West. He was first elected to Dublin City Council in 1974 and then to the Dáil in 1981 where he held his seat through 5 general elections until he retired in 1997, topping the poll in both 1989 and 1992. Mervyn served as Minister for Equality and Law Reform from 1993-1997 and also served as Labour Party Chairman and Chief whip.

President Higgins has described Mervyn as “An icon in the struggle for equality”. Mervyn’s prodigious legislative output as Minister confirms this revered status and reflected his priorities and his ambition. He was a serious legislator who was in politics to draft laws and make social change. Mervyn introduced big ticket changes to Irish discrimination and employment laws via the Employment Equality Bill and the Equal Status Bill both of which were drafted during his time in office. These were not easy laws to change and Mervyn faced fierce resistance. Both bills were initially struck down by the Supreme Court as unconstitutional, in part because it was thought that the new requirement to provide “reasonable accommodation” when it came to the employment of people with disabilities was a disproportionate attack on the constitutional property rights of employers.

But Mervyn persevered, the bills were amended during his last months in office and they have since stood the test of time. Among the other laws Mervyn introduced was the Organisation of Working Time Act which provides for basic employment rights such as statutory rest breaks and a maximum 48 hour work week. Mervyn also passed the Interpretation Act which requires gender-inclusive language in Acts of the Oireachtas. He passed the Maternity Protection Act, the Civil Legal Aid Act, the Adoptive Leave Act, the Family Law Acts, the Domestic Violence Act and the Stillbirth Registration Act. And he famously led the successful referendum campaign in 1995 removing the constitutional ban on divorce. All of these laws attempted to create a kinder, fairer, more inclusive society. Millions of our citizens now rely on the protections Mervyn enacted for them.

Mervyn came from a modest background; his parents were Jewish immigrants who ran clothes shops on Mary Street and Talbot Street. Mervyn himself worked exceptionally hard to get to where he did in life. But when he became a success he didn’t seek to pull up the ladder behind him. Instead he extended his hand out to support others coming up after him; he identified with those who had it tough and he worked to make their lives better. He believed that the State could and should do more to support minorities and oppressed members of our society in reaching their potential and living full lives in Ireland. He saw the barriers and discrimination that existed for women and minorities in accessing and flourishing in the workplace, in accessing goods, services and accommodation, and he did something about it by implementing laws to change the status quo. Mervyn identified solutions and implemented them. That is what we try to do as a Labour Party and that is the legacy of achievement that we all must aim to build on.

We rightly honour Mervyn and we thank him for what he did to make our Republic more equal and tolerant. His laws and campaigns set the stage for Marriage Equality and Repeal which followed over the 20 years after he retired.

Our challenge today is to preserve and build upon Mervyn’s achievements, because it is clear that the human rights that he fought for are under more threat now than ever.

Mervyn represented our Party, our constituency and our voters with dignity and a steely determination. We can all hope to live up to the example he has set for us.

You can watch a video remembering Mervyn Taylor here