Last weekend, Labour Youth members had a fantastic weekend in Ennis, Clare where we decided to have our National Conference. 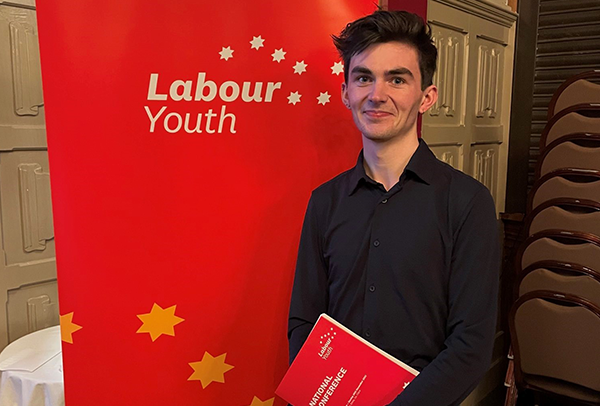 Last weekend, Labour Youth members had a fantastic weekend in Ennis, Clare where we decided to have our National Conference. I am delighted to have been elected Chair of Labour Youth for the coming year. I want to thank all the party members who supported me and shared my vision, for the future of Labour Youth and the Labour Party. A vision of inclusive left wing environmentalism and democratic socialism that advances the rights of working people and the most vulnerable in Irish society. I also want to congratulate my fellow members of the National Youth Executive, Conal, Simon, James, Lorna, Lhamo, Luka and Rob on their election.

In my remarks to Labour Youth Conference, I expressed  my wish to continue Labour Youth’s tradition of being the conscience of the Labour Party and push for more progressive change both in the Party and in Irish society. Through Labour Youth, I want to push forward a message of being rooted, radical and relevant. I believe the Labour Party is the most rooted party in the country. We need to be radical and relevant to rebuild our Party and I believe Labour Youth will have an important part to play in making our party, once again, an effective force for progressive change.

Labour has a proud track record of campaigning on progressive issues and introducing progressive policy. Under my tenure, Labour Youth will continue the work of former chairs : James Kearney on DECRIM, the campaign for making drug use safer; and Cormac O Braonain on Born Here Belong Here, the campaign for birthright citizenship. Housing and climate change are the biggest issues facing our generation. I am keen for Labour Youth to campaign on these issues and push for stronger policies in these areas. The Labour Party is at a crossroads. Ivana’s historic election in Dublin Bay South and as leader of our party has given Labour new momentum to rebuild and reclaim its place at the heart of progressive politics and change.

I was proud to campaign for Ivana in Dublin Bay South. Ivana’s election sent a clear message that Labour is the alternative for so many people left behind by a decade of Fine Gael policy. That same alternative can put forward in many other constituencies. We are in need of generational change in our party and Labour Youth is keen to play a part in welcoming a new generation of activists and young people who want to see greater climate action, a housing system that works for the many and free education at first, second and third level. Our party has to listen to the needs and voices of young people.

As chair of Labour Youth, I am keen to continue growing Labour Youth and continue our engagment with young people in schools and colleges across the Island. I believe many young people will find a home in Labour if we step up to the challenge. We can also develop closer ties with the Social Democratic and Labour Party Youth in Northern Ireland.

I am keen to engage with members all across our Island to build a vision of a country that leaves no one behind.