Senator Annie Hoey joined a delegation of parliamentarians and trade unionists in Colombia between 28 May and 2 June. 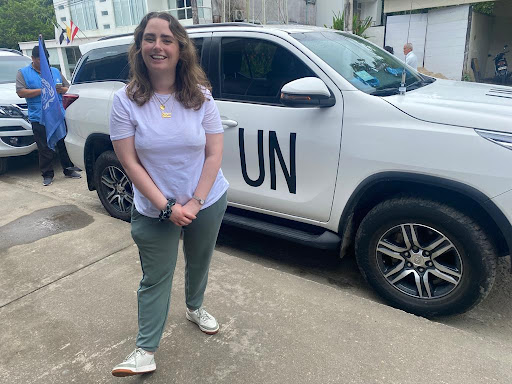 This year I was proud to join a  delegation of parliamentarians and trade unionists in Colombia between 28 May and 2 June to monitor the current state of trade union rights, human rights and the peace deal signed between the Colombian state and the FARC-EP in November 2016.

The delegation was organised by the British-Irish organisation, Justice for Colombia, which campaigns in support of peace and human rights in Colombia. The visit coincided with Colombia’s presidential elections, following an earlier call from human rights organisations and election monitoring bodies for an increased international presence in the country.

During the visit, we met with:

The delegation travelled to Puerto Asís, Putumayo, to receive testimonies from communities impacted by human rights violations. Among them were relatives of people killed in an army raid in Puerto Leguízamo on 28 March 2022. We received harrowing testimonies from victims’ relatives and heard how President Iván Duque celebrated the operation, claiming eleven “dissidents” had been killed. Over two months later, no evidence had been produced to back the claim. The Colombian government should retract its stigmatising statements against the victims, provide financial and psychological support to those affected and ensure accountability for any state agents found culpable.

The delegation also visited a reincorporation zone in Agua Bonita, Caquetá, to hear about the experiences of former FARC combatants, who have developed productive projects including agriculture, fish farming and tourism. They have opened a cultural centre with a library and museum, published books and provided young people with journalistic training. Here, we met with the Humanicemos de-mining organisation, formed by former guerrillas who are clearing landmines, offering a clear example of the important role they can play when given the necessary means. Across Colombia, however, former combatants are experiencing enduring difficulties in accessing economic support and services which impedes their transition to civilian society. These issues need to be addressed, with particular focus placed on New Areas of Reincorporation (NARs) where the majority of former combatants now reside.

Violence against former FARC combatants is an extreme concern, with human rights organisations having registered 320 former combatants murdered. One group of former combatants now residing in Doncello, Caquetá, told us about the complete lack of security that had led to their forced displacement. They had been surrounded by armed groups who burnt their vehicles and issued death threats. We also met with former combatants who were based in the village of Puerto Guzmán in Putumayo. They told us how an armed group had entered their settlement and killed the president of their newly-formed cooperative and injured several other people.

More than 1,000 social leaders, trade unionists and human rights defenders have been killed since the peace agreement’s signing. Paramilitary successor and other illegal armed groups are expanding across the country, as evidenced by the recent ‘armed strike’ in northern Colombia declared by the most significant illegal armed group, the Clan de Golfo. Staged the same month as the presidential election, the Clan de Golfo ordered a suspension of every-day activities under the threat of violence in hundreds of municipalities across a third of the country’s thirty-two Departments. The lack of government response to the continued operation of paramilitary successor groups is a grave concern, with reports of collaboration across state institutions a particular worry. We urge authorities to advance with the implementation of a policy for dismantling paramilitary successor groups as is stipulated in the peace agreement.

There were widespread concerns over the current government’s approach to human rights following police repression of National Strike protests last year. Investigations into state agents implicated in abuses have made little progress, raising concerns of impunity in cases of killings, sexual assaults and intentional permanent injury.

Implementation of the peace agreement has advanced far slower than hoped, particularly in the area of comprehensive rural reform. Advancing the rural reform programmes can contribute to easing extreme inequalities but so far insufficient change has materialised in the specially-designated zones, selected due to their historic state abandonment and high levels of conflictivity.

The continued participation of almost 100,000 families in voluntary crop substitution programmes demonstrates the strong support for peace among civil society. However, many families lack adequate state support to transition to legal crops. We are concerned at reports of security forces continuing to forcibly eradicate coca crops, as well as government plans to reintroduce aerial fumigation. The peace agreement’s focus on addressing root causes of the coca trade could potentially transform social-economic conditions in the countryside but it is essential that alternative economic opportunities are provided or efforts to eradicate illicit crop production will be unsustainable.

The transitional justice system is conducting vital work to establish the truth around the armed conflict and gain justice for victims. We welcome the advances made by the Special Jurisdiction for Peace in investigating serious crimes, while the Truth Commission has gathered testimony from a broad segment of Colombian society. The successful completion of these institutions’ tasks can help Colombia build reconciliation. We give full support to the transitional justice system and call on both Colombia’s outgoing and incoming governments to guarantee the necessary resources to perform its functions. It is extremely important that the implementation of the transitional justice programme remains true to the spirit of the agreement – the delegation heard concerns that changes could be being made to the rules governing the amnesties handed out to former combatants.

Women’s organisations are making important contributions to Colombian society by advancing their political participation and confronting inequality. We met with women trade unionists and human rights leaders, such as the ASONAM women’s association who told us about their work promoting women’s involvement in trade unions and particularly in leadership roles. Women are leading efforts to strengthen human rights and peace in Colombia and we intend to further strengthen support internationally for the Colombian women’s movement.

The presidential election on 29 May saw no outright victor and, as such, a second round was held on 19 June. While the delegation was encouraged at the reduction in violence around the elections, there was still considerable concerns in relation to reported purchasing of votes and threats of violence in rural municipalities. The delegation was told of direct interference in the election from both the Colombian President and the Colombian Army General which raised grave concerns for the democratic process. We were also told of fears about the computer software used to count the votes as opposition parties had been refused access to a full audit of the computer programme.

On the 19th of June Gustavo Petro, the candidate with broad support on the left, became the new president of Colombia. The country’s new vice-president Francia Márquez was also elected and is the first African-Colombian woman to hold the role.

Under this new President I am hopeful that Colombian people will have a democratic state with equal opportunities for all.