Despite the logistical setbacks forced by the pandemic, TJ persevered by going digital in 2020 and 2021. 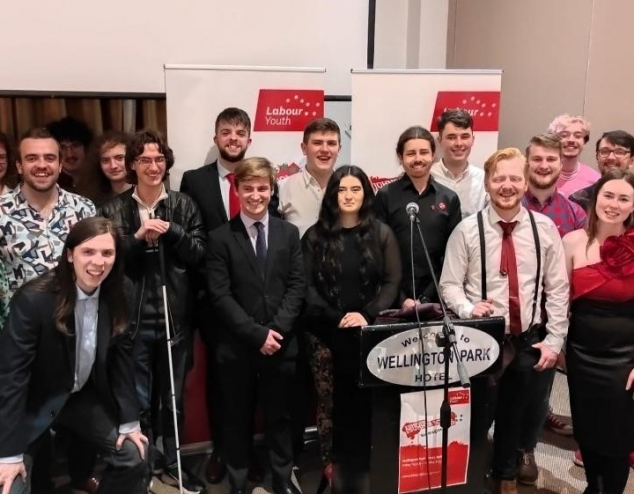 The Tom Johnson Summer School is an institution within the Labour Party. Many of our party leaders today have come through Labour Youth, and would have been inspired and informed by conversations that took place at the Summer School in the years gone by. It serves an important function- to provide a starting point within the party for those who will go on to lead it in the years to come.

Despite the logistical setbacks forced by the pandemic, TJ persevered by going digital in 2020 and 2021. However, nothing beats being there in person and, as was the wish of our late comrade Cormac Ó’Braonáin, we were delighted to have been able to hold the event in Belfast from the 1st to the 3rd of July.

“Reimagine” was the theme of the Summer School this year. To reimagine, not only Ireland and Europe, but also the Labour Party. Labour embraces the challenges of Ireland, and provokes the changes of Ireland. We have been able to do that for 110 years, because we reimagine. We always have.

Right from the beginning of the State, Tom Johnson’s Labour Party set forward an alternative to a vision that was already tired. We stood up and advocated for a peaceful alternative to the bloody conflict that gripped our island in the 1920’s, one in which the shared concerns and interests of everyone in Ireland had to be addressed and pursued.

In more recent years, we set forth our visions for divorce, for abortion rights, for marriage equality, for workers rights and for Ireland’s first female president. We have seen our visions achieved, because we dare to reimagine.

From the society, to the economy. Our vision, and our achievements of advancing social welfare payments under Brendan Corish displayed a commitment to social justice that we still carry today through our establishment of the Workplace Relations Commission, and our ongoing Ireland Needs A Pay Rise Campaign.

Our vision for full LGBT+ equality was displayed in 1989, when we amended the Incitement of Hatred Act to include the first ever legal protections for gay and lesbian people in Ireland. In more recent times, our strong and uncompromising stand on marriage equality, and our campaigning to further the rights of transgender people, continues to display that vision of justice and fairness. And of course, the Labour Party will always stand in solidarity with the survivors of conversion therapy, and the campaign to ban this abhorrent practice.

This shows the bold vision that the Labour Party has always had in changing and daring to reimagine what Ireland can be. We hold a legacy that no other party can claim, try as they might. We continue to embrace new challenges, provoke changes, and reimagine.

As well as daring to reimagine, we have to understand the past. As no one had a chance to properly celebrate the lives of John and Pat Hume due to the pandemic, we wanted to give those present at the Summer School an opportunity to hear from those who knew the Humes, and to reflect on their immense contribution to peace and stability on this island. We also heard from our keynote speaker, former Labour leader Eamon Gilmore, who gave us an insight into his work in the Columbian peace process, in Ukraine, and the work he is undertaking in his role as the EU Special Representative for Human Rights.

I was delighted to join with our party leader Ivana Bacik and Labour Youth Chair James Kearney to present the Jim Kemmy Thirst for Justice Award to Ambassador Larysa Gerasko at the Embassy of Ukraine the week before Tom Johnson. Ambassador Gerasko could not attend TJ, as she was present at the Ukrainian film festival in Dublin that weekend. In the time since the beginning of the invasion of Ukraine, we have all seen the strength, courage, hope and perseverance displayed by Ukrainians all over the world, and especially in Ireland. Ambassador Gerasko has personified the values we have all seen displayed by the Ukrainian people, both at home and abroad. It was an honour to have presented the award to Ambassador Gerasko on behalf of Labour Youth.

Our final Tom Johnson event was to hear from our party leader, Ivana Bacik. I took the opportunity to thank Ivana for an amazing bye-election campaign, my first campaign as a member of the Labour Party, which allowed me to make friends and exchange ideas. I also had to thank Ivana’s campaign for teaching me more about the Sandymount cycle lane than I could ever have imagined!  Ivana set forward the Labour Party’s vision for the constitutional future of the island, a vision of equality and redistribution, one in which our equal republic is to be based on pluralism and social equality, and one that can see beyond sectarianism and semantics.

Both Ivana and myself had the great opportunity to speak in a room full of the next leaders of the Labour Party. Those who have and continue to attend Tom Johnson are to be those who lead our Party in the years to come. I’d like to thank everyone who attended Tom Johnson, be they Labour Youth or others, for contributing to the revival of the Summer School as an in-person event. I would also like to thank all those who spoke on our panels throughout the weekend, including those in the Parliamentary Labour Party and the SDLP Parliamentary Party. A big thank you is also due to Alan Kinsella, who provided a wide range of interesting and thought provoking election material to the event, giving us younger members a look at some of the great names and figures that came before us in Labour, who reimagined, and who gave us so much of what we have today.

As a final word, I’d like to say a huge thank you to the woman that made Tom Johnson happen, (as she has done for several years), Aideen Blackwood, whose guidance and expertise was crucial in the months of preparation put into making the first in-person Tom Johnson in three years a success, thank you!

This party is on the up, with recent polling placing us on 6%, but we have a lot of work to do to grow and get beyond that. The Tom Johnson Summer School is an institution within the Labour Party, and although we have not yet seen a Labour Taoiseach, as long as the future leaders of this party continue to reimagine and be inspired and informed by the conversations that take place at the Tom Johnson Summer School, that day will come!