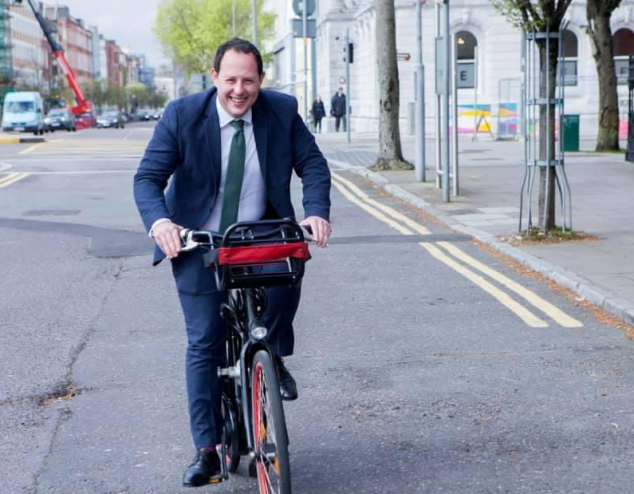 The recent report in the Irish Examiner (https://www.irishexaminer.com/news/munster/arid-40995341.html)  showing traffic levels in Cork have reached pre-pandemic levels shows we need to up our game on public transport reliability but more crucially, see a structural change that allows changes to be made locally and stop relying on Dublin, writes Cork City Labour Party Local Area Representative Peter Horgan.

The figures reported on in The Irish Examiner that Cork traffic is now at pre-pandemic levels should not be met with a shrug of the shoulders and a shake of the head. It should be met with action and a resolve to solve this heightened carbon and societal problem. To date, that solution has been held by Dublin based agencies. It’s not working. We need to reassess how we approach decision making.

The Labour Party proposed in Budget 2023 for the introduction of a €9 monthly Climate ticket for public transport for 6 months costed out at €300 million. It is modelled on the German scheme. In three months, the German scheme saved 1.8 million tonnes of CO2 emissions – equivalent to the annual output from 388,000 vehicles. In Ireland, that would be the equivalent of taking 23,000 cars off the road. If introduced, our Climate ticket would help people make the move to public transport in Cork, save costs on fuel, and help Ireland meet our emission targets.

There are those that rubbished the German model, without fully exploring what was the outcome of it. A new study by the Institute for Transport and Space at the Erfurt University of Applied Sciences showed that the 9-euro ticket significantly improved access to the transport system and opportunities for people on low incomes to participate in society. The ticket enabled those surveyed to have more social contacts, more activities outside of the home and improved accessibility to services of general interest and thus led to an overall better quality of life for people on low incomes.

The central results from Erfurt University of Applied Sciences found:

– For many respondents, the ticket enables access to mobility offers that they were previously unable to use or only to a very limited extent. The survey confirmed that the majority of those surveyed traveled more frequently while they were in possession of the ticket. This effect is particularly visible in the lower income groups (less than 1,250 euros net per month) and decreases significantly with the increasing income of those surveyed with a 9-euro ticket.

– The vast majority of respondents would like a follow-up offer to the 9-euro ticket. The average willingness to pay of the respondents is 25 euros per month.

Nobody is saying that a Climate Ticket would solve all our transport ills. The biggest issue out of the recent Bus Connects public consultation was that of reliability. People do not trust the bus service because of the experiences people have had with real time information board and the matter of ‘Phantom buses’. That is what I hope Bus Connects will address with the new routes being rolled out in 2023. That rollout will be crucial to phase two consultation of the contentious bus corridors and public representatives will have to make decisions on whether they want to shout loudly against any plan or work constructively on improving public transport for the city. Bus Connects is not perfect and the public consultation had errors but the reaction from some quarters of sheer anger totally outstripped the rationale for initial plans. Th next phase must be cognisant of that but we cannot ignore rising traffic issues and the fact that all road users are impacted by that, especially buses.

The Light Rail project for Cork is to be unveiled  in early 2023. After questions from my colleague Seán Sherlock TD showed €1.3 million has been spent to date on designing the preferred route. The final business case for the Cork Luas has yet to be agreed, so the project remains at the danger of high inflation and building costs and the whim of a fragile economic and political outlook.

The traffic figures show that remote working in Cork must be under pressure. Flexibility in terms of hours of work and place of work is a key demand of workers Cork city. Flexible work should not just be something granted for those with caring responsibilities and, as many parents point out, the need for flexibility does not stop when a child turns 12, as government plans suggest.

This is particularly an issue for women. Whether we agree with it or not it is still the case that women take on the lion’s share of caring responsibilities. It is also the case that while many have fought for years for improvements, we still have a massively expensive and often not readily available childcare services in Ireland. A right to flexible work is a right to make our every growing complained juggling of responsibilities that little bit easier for women.

At this point you probably wonder where Constitutional Reform comes into the picture. We look at potentially another election in Northern Ireland where the sands continuously shift and Brexit brought forward a number of decades the potential of a border poll. We must prepare for such a poll and the possibilities in the next number of years that it passes.,

The introduction of an All-Island State must take into account that constitutional, legislative, and institutional changes will happen across the entire island, not just the North. It is no fit state, should we continue to accept the status quo, that all things flow in and out of Dublin. Especially in something as tribal

The preparation of an All-Island State should seek to repair the dearth of self-determination at local government level in terms of certain powers. Currently as it stands, the powers of local government, as elected by the people at local elections, are embarrassingly small. Rather, it is the executive at local authority level that calls the shots or national bodies ‘dictating’ to Councils on what will happen in their area but even at that the crucial powers off policing, transport and revenue raising are held in Dublin.

There have been many iterations of Local Government in this Country but the most recent changes have resulted in a democratic deficit. The one revenue raising power Councils have, with the Property Tax, cannot be ring fenced for a Council area to show residents the importance of local money raised for local projects.

Removing vested power in the Custom House and giving it to the local authorities in all 32 Counties must be a priority for any All-Island approach to local government. It will soothe concerns from those communities resistant or anxious on the unification agenda and also place power back in the hands of local representatives, no matter their party or background.

There are those who will say that such an approach can lead to short-termism, but the intelligence of the Irish people, across the whole island, will be borne out as it has done in previous elections. To now, local elections have been about the local road, the local issue. This is a chance that will allow candidates and parties to set out where their see their city or municipality in 5/10 years time and will be judged on that.

This does not come without risks but it also comes with opportunities. If local authorities can determine the powers of public transport, community policing, local housing (without the red tape of Central Government) it can usher in a new chapter of local government by the people. It can reduce traffic, reduce emissions and place power back in the hands of the people.