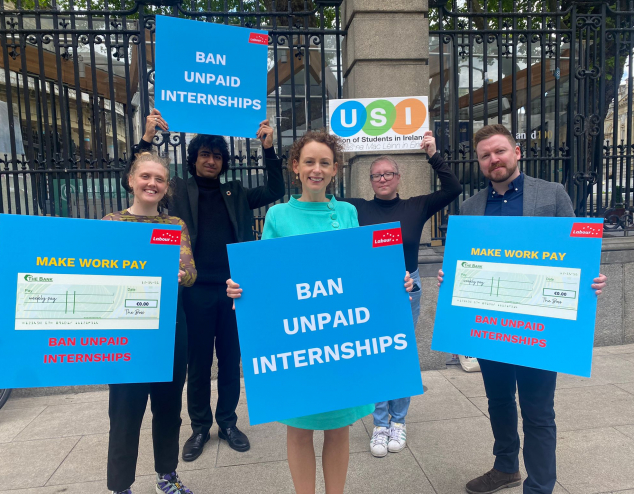 My last job prior to the pandemic was working as an intern in the newsroom of a regional newspaper.

The internship was as part of my college degree, and I credit the internship with helping me land a well-paid and rewarding job in my dream field of entertainment journalism.

There was only one problem – it was unpaid.

For the duration of the 6-month unpaid internship, I was living off my parents hard-earned money.

Thankfully, I had the opportunity to work at my college newspaper which paid 75 a week which went someway to helping ease the financial pressure, but this was in 2019 – 75 a week wouldn’t get you very far these days!

It should not be a case that I was living off my parents money or working an additional job on top of my 40 hour work week just to get some semblance of financial independence.

An unpaid internship is a symptom of the “pull yourself up by the bootstraps” culture that Reagan and Thatcher popularised.

To be clear, not paying interns was not the choice of the editorial staff at the paper (I finished up just before Christmas 2019 and the entire team banded together to give me a Christmas card with 300 euro in it) but this is the choice of the company that owns the paper.

And this company – and media owners in Ireland – are hellbent on making sure that only the middle class and college-educated can work for them.

Cordoning off journalism to those who can rely on mam and dads financial support is deeply wrong, and is a symptom of the Ireland that Micheál and Leo have created.

When it came time to go on the job hunt after graduation, a job opened up at the newspaper, and if I had applied for the job, I certainly would have gone to interview at the very least.

I had a strong working relationship with the staff there and they were familiar of what I could bring to the table.

Despite the possibility of walking into a job straight after graduation, I didn’t apply for the simple reason I did not want to contribute to the system that is in danger of making us like the UK.

We only need to look to our neighbours the other side of the Irish Sea to see what happens when you make media jobs attainable for the few and not the many.

For those keeping score at home, the UK is currently being run by a Tory government that is made up of privately educated, work shy elites that never had to work a day in their lives.

This culture starts at 10 Downing Street and trickles down into a media landscape where the privileged elite act as a modern-day Commodus.

And Ireland is in danger of becoming like our neighbours.

The problem stems from the media industry only allowing a chosen few to become journalists.

If you didn’t have the financial backing of mam and dad, you simply don’t get to progress in the media landscape that has at every opportunity made sure that the status quo is maintained.

This notion that you need a piece of paper to become a journalist is laughable.

The advent of social media has shown us that anyone can pick up a phone and report on major events.

Even setting up a WordPress and simply writing about what you saw on the news makes you a journalist.

The establishment, as it were, want to keep the media the job of the college-educated.

God forbid we get views from those of the working class in our media landscape, we might run the risk of actually being exposed to opinions from people outside of Dublin newsrooms.

Irish media is in dire need of new voices from those outside the pale, and lifting the financial barriers to a career in journalism is a great place to start.

In Spain, our sister party the PSOE brought in a so-called “Google Tax” in 2020 that meant that 3% of Google’s operational income in Spain was channelled into a fund that funds journalism.

With our relationship with tech giants rightfully under fire and the prospect of a Left-led government after the next election, Ireland has a generational opportunity to fund newsrooms properly and make a career in journalism that much more realistic.

With the prospect of giving journalism a generational boost in terms of revenue at a time when it needs it the most, a substantial amount of the revenue must go towards making sure the media isn’t just the playground of wealthy suburbanites.

The media industry in Ireland at present is exclusively reserved for those who have the wealth and means to pay for an undergraduate degree (and in some cases, a masters degree) and there is now a golden opportunity to reshape it so that just about anyone can work in newsrooms.

The pandemic has made us more aware of social and labour issues, and Labour is the only party in opposition that recognises that too many of us are living pay slip to pay slip.

Senator Sherlock’s bill to ban unpaid internships is incredibly encouraging and is a testament to the work Labour as a party are doing to fight for workers of all stripes.

Journalism in Ireland is in dire need of new blood, and unlocking the gates erected by the gatekeepers of Irish media is something Labour needs to fight for.

A robust media landscape is a crucial part of any country, and we need only look to the United States, Australia or the United Kingdom as to what happens when the rich have control of the fourth estate.

Mike is a media professional based in Dublin and a Labour member in Roscommon-Galway.  He has written for both local and national media outlets.