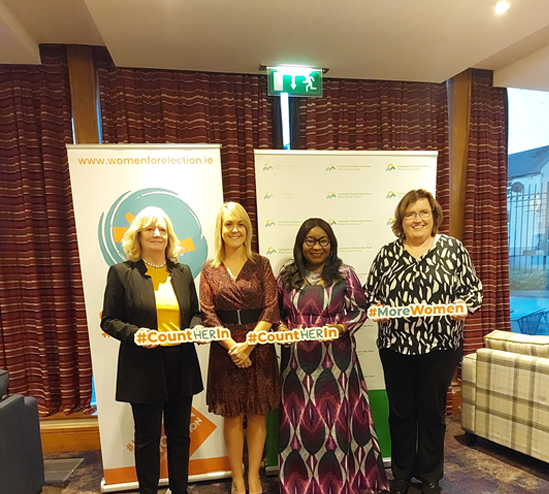 ‘Supporting More Women for Local Election in Offaly’ is a comprehensive training and awareness programme that will aim to engage, encourage and inspire women and women of diversity from all across the county to consider getting involved in politics. Offaly ranks as the lowest County in Ireland for female representation at Local Government level, with just one female Councillor out of 19.  In the 2019 Local Elections, only 8 women ran out of a total of 36 candidates across the three Local Electoral areas in Offaly, that’s just 22% of candidates.

The Programme for Government 2020 sets out to change this so that the council chamber truly reflects the diversity of the county. The Department of Housing, Planning & Local Government has funded a programme supporting women for Local Election in Offaly. The programme will be delivered by Women for Election on behalf of Offaly County Council, and includes a variety of training programmes across October and November.

The launch had a full attendance and brought together community groups, public representatives, members of the PPN, LCDC and Offaly County Council to formally launch the campaign. Minister of State in the Department of Housing, Local Government and Heritage, Peter Burke launched the campaign at the event in Tullamore and the video for the campaign was screened at the event.