Confidence and Hope in Liverpool 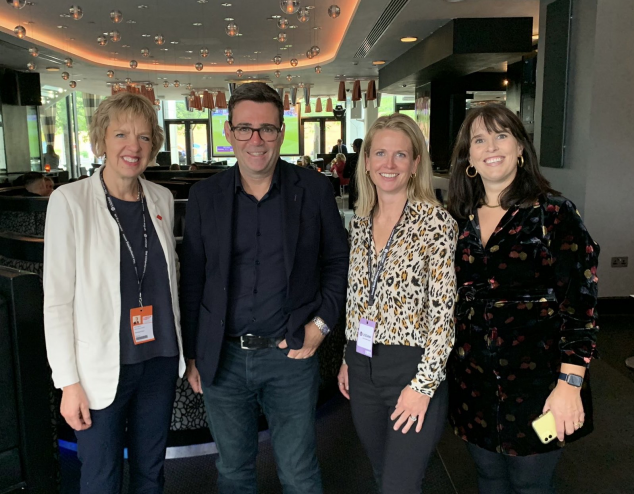 The mood of the conference was overwhelmingly positive and it was clear that the mood in the UK Labour Party was buoyant, focused and that they were preparing for government. There were a number of solid Labour announcements such as Labour’s plan for a National Wealth Fund for a just transition, Labour’s plan to re-nationalise the rail network and the creation of ‘Great British Energy’.

Our first event was a Joint Fringe event between the Labour Party Irish Society, Labour Movement for Europe and the Party of European Socialists.  Ivana spoke at this event along with Stella Creasy MP and Stephen Doughty MP, Shadow Minister for Foreign and Commonwealth Affairs and International Development – all contributing to a robust debate on the UK’s relationship with the EU post Brexit. Later that afternoon we were delighted to meet with Mayor Andy Burnham and talk to him about the role of directly elected mayors, devolved regional government and his experience in the delivery of affordable housing.  We then hurried to catch the end of another well attended Labour Party Irish Society event and were delighted to meet with Emily Thornberry MP and Ireland’s Ambassador to the UK, Martin Fraser.

On Monday morning, we had a constructive meeting with our Peter Kyle MP Shadow Secretary of State for Northern Ireland, SDLP MPs Colm Eastwood and Claire Hanna and members of the Labour Party Northern Ireland where we discussed how our sister parties can increase our co-operation and collaboration.  Later that evening I spoke at the hottest ticket in town (literally) with Colm and others including London Mayor Sadiq Khan at the infamous Labour Party Irish Society social event, the biggest they have ever had – many thanks to the Chair Liam Conlon and the LIPS executive for inviting me to speak.

Walking around the conference centre in Liverpool it was hard not to feel optimistic for the future for the British Labour Party.  The Party is thinking strategically, clear on its message and confident on what it needs to do in the run up to the next election.  I look forward to going over to canvass for them whenever that may be!